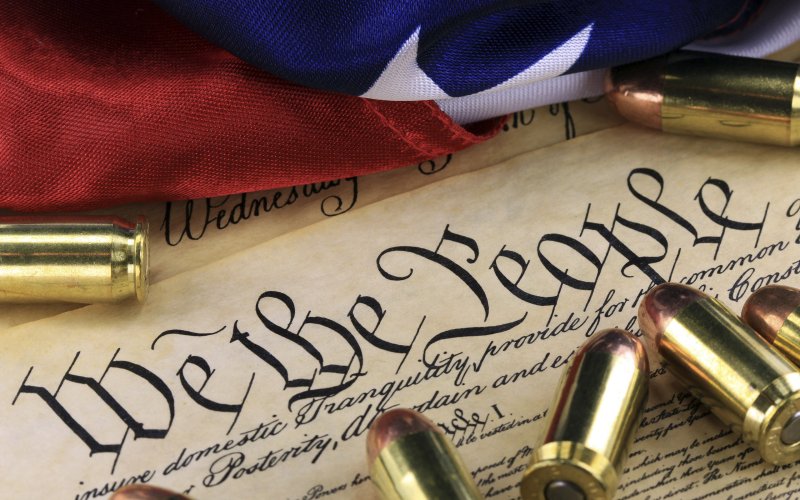 In the making of the Constitution, the Founding Fathers were cognizant of the need for self-defense. Protection from Native Americans and external enemies was key, and they were also aware that the new government they were creating could itself become a threat, requiring a defensive response.  However, there was no language about the right to bear arms in the Constitution itself.  After it was sent to the states for ratification, many anti-Federalist voices expressed concern about the possibility the new federal government would be too powerful. Supporting the Constitution were the Federalists who believed a strong central government was necessary to hold the new nation together.

Due to these fundamental differences, it soon became apparent that the Constitution could not be ratified by the necessary nine states without the addition of a list of the specific rights of the people. To address this, the Federalists promised that the First Congress would pass a Bill of Rights if the anti-Federalists would go ahead and vote to accept the Constitution. This promise persuaded enough anti-Federalists to vote yes on the Constitution and it was passed.  As promised, the First Congress began the task of creating this list, which ultimately became the Bill of Rights.

As might be imagined, the debate regarding the right to bear arms was long and passionate, with a great deal of time devoted to just how the amendment should read.  Some of the language that existed then and formed the basis for discussion is listed below.

Virginia Declaration of Rights (1776): That a well regulated militia, composed of the body of the people, trained to arms, is the proper, natural, and safe defense of a free state...

Vermont Constitution (1777): That the people have a right to bear arms for the defence of themselves and the State...

Articles of Confederation (1781): ...every State shall always keep up a well-regulated and disciplined militia, sufficiently armed and accoutered, and shall provide and constantly have ready for use, in public stores, a due number of field pieces and tents, and a proper quantity of arms, ammunition and camp equipage.

New Hampshire Ratification Document (1788): Congress shall never disarm any citizen, unless such as are or have been in actual rebellion.

Virginia Ratification Document (1788): That the people have a right to keep and bear arms; that a well regulated militia composed of the body of the people trained to arms, is the proper, natural and safe defence of a free state... That any person religiously scrupulous of bearing arms ought to be exempted upon payment of an equivalent to employ another to bear arms in his stead.

New York Ratification Document (1788): That the people have a right to keep and bear arms; that a well-regulated militia, including the body of the people capable of bearing arms, is the proper, natural, and safe defence of a free state.

Madison's Introduction of the Bill of Rights (1789): The right of the people to keep and bear arms shall not be infringed; a well armed and well regulated militia being the best security of a free country; but no person religiously scrupulous of bearing arms shall be compelled to render military service in person.

Report of the House Committee of Eleven (1789): A well regulated militia, composed of the body of the people, being the best security of a free State, the right of the people to keep and bear arms shall not be infringed, but no person religiously scrupulous shall be compelled to bear arms.

Amendments as passed by the House (1789): A well regulated militia, composed of the body of the People, being the best security of a free State, the right of the People to keep and bear arms, shall not be infringed, but no one religiously scrupulous of bearing arms, shall be compelled to render military service in person.

In the end, a compromise was reached between the Federalist and the anti-Federalist camps, in the form of the 2nd Amendment.  The "right to bear arms" amendment went through several alterations before it was approved on September 21, 1789, and sent to the states for ratification. It became law as the 2nd Amendment with Virginia's vote for ratification on December 15, 1791.  Ratification has not, however, extinguished the controversy over the law.  At the heart of the matter is what the Second Amendment means:  is it an individual right or one reserved to the state?  Over the years, there have been a number of events related to this law:

1871: NRA Founded
The National Rifle Association was founded by a pair of Union soldiers in 1871, not as a political lobby but as an effort to promote the shooting of rifles.

1822: Bliss v. Commonwealth Brings ‘Individual Right’ Into Question
The Second Amendment’s intent for individual Americans first came into question in 1822, in Bliss v. Commonwealth. The court case arose in Kentucky after a man was indicted for carrying a sword concealed in a cane. He was convicted and fined $100.  Bliss appealed the conviction, citing a provision in the Commonwealth’s constitution that states: “The right of the citizens to bear arms in defense of themselves and the state, shall not be questioned.”  In a majority vote with just one judge dissenting, the court overturned the conviction against Bliss and ruled the law unconstitutional and void.

1856: Dred Scott v. Sandford Upholds Individual Right
The Second Amendment as an individual right was affirmed by the Supreme Court of the United States in its decision in Dred Scott v. Sandford in 1856. With the rights of slaves in question, the nation’s highest court opined on the intent of the Second Amendment for the first time, writing that affording slaves full rights of American citizenship would include the right “to keep and carry arms wherever they went.”

1968: Gun Control Act Ushers In New Regulations
Thirty years after America’s first sweeping reform of gun laws, the assassination of President John F. Kennedy helped to usher in new federal legislation with wide-ranging implications. The Gun Control Act of 1968 prohibited mail order sales of rifles and shotguns, increased license requirements for sellers and broadened the list of persons prohibited from owning a firearm to include convicted felons, drug users and the mentally incompetent.

1994: Brady Act and Assault Weapons Ban
Two new federal laws passed by a Democrat-controlled Congress and signed by President Bill Clinton in 1994 became the hallmark of gun control efforts of the latter 20th Century.  The first, the Brady Handgun Violence Protection Act, required a five-day waiting period and background check for the sale of handguns, while also requiring a National Instant Criminal Background Check System to be created. The second, the Assault Weapons Ban (officially entitled the Violent Crime Control and Law Enforcement Act) banned a number of rifles defined as “assault weapons,” including many semi-automatic, military-style rifles such as the AK-47 and SKS.

2004: Assault Weapons Ban Sunsets
A Republican-controlled Congress refused to pass a reauthorization of the Assault Weapons Ban in 2004, allowing the ban to expire. President George W. Bush was criticized by gun control supporters for not actively pressuring Congress to renew the ban, while gun rights supporters criticized him for indicating that he would sign a reauthorization if Congress passed it.

2008: D.C. v. Heller is a Major Setback for Gun Control
Gun rights proponents were thrilled in 2008 when the U.S. Supreme Court ruled in District of Columbia v. Heller that the Second Amendment extends gun ownership rights to individuals. The decision affirmed an earlier decision by a lower appeals court and struck down handgun bans in Washington D.C. as unconstitutional.  The case was lauded as the first Supreme Court case to affirm the right of an individual to keep and bear arms in accordance with the Second Amendment. However, the ruling applied only to federal enclaves, such as the District of Columbia. Justices did not opine on the Second Amendment’s application to the states.

2010: Gun Owners Score Another Victory in McDonald v. Chicago
Gun rights supporters scored their second major Supreme Court victory in 2010, when the high court affirmed the individual right to own guns in McDonald v. Chicago.  The ruling, which was an inevitable follow-up to D.C. v. Heller, marked the first time that the Supreme Court ruled the provisions of the Second Amendment extend to the states. The ruling overturned an earlier decision by a lower court in a legal challenge to Chicago’s ordinance banning the possession of handguns by its citizens.

Starting in the latter half of the 20th century, the amendment became an object of heated debate. Concerned with the role that firearms play in rising violence, gun control advocates began to read the 2nd Amendment one way.  On the other side, firearm enthusiasts saw the attacks on gun ownership as attacks on freedom, and defended their interpretation of the 2nd Amendment just as fiercely.  In a way, both contemporary interpretations are correct, making it difficult to find any kind of balance between freedom and reasonable regulation.  There is precedence in interpretations that adjust meaning to fit the times.  The right to bear arms comes with important responsibilities to ensure that guns are used safely and are available only to those with proper licensing and training.  Assuming that politicians would listen to and act in accordance with the wishes of the majority of ‘we the people’, a compromise between the two oppositional interpretations of the Second Amendment is just possible.