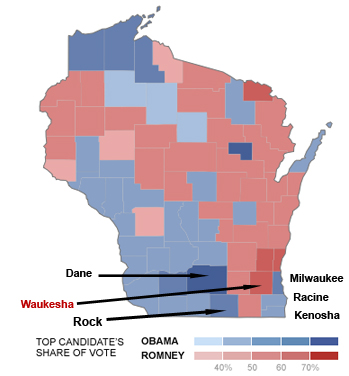 Here in Wisconsin, we can see that voting patterns and racial diversity are also correlated. Nearly 90% of Wisconsin's African American population lives in the following six counties, all of which are located in Southeastern or Southern Wisconsin, including Milwaukee, Dane, Racine, Kenosha, Rock, and Waukesha. We can see the correlation in a map showing how Wisconsin voted in the 2012 Presidential election. Although President Obama won many counties in Wisconsin, he of course gained the most votes in the counties with the densest populations and with the densest concentration of African-Americans (the one exception being Waukesha county). The only other county with a very high turnout of Democratic votes, Menominee, cast a total of 1,376 votes in the Presidential contest and 1,191 (86.6%) of those votes were for the President.