Senator Grothman has just introduced yet another piece of legislation designed to put obstacles in the way of citizens who want to vote. This time it's same day registration. Previously, it was reducing and restricting early voting days and hours, preventing people from voting in the evenings or on weekends. And of course there's the Voter ID law currently being adjudicated in both state and federal courts.

These efforts weaken our democratic system both because they make it more difficult for eligible voters to register and cast their ballots and because they send a discouraging message to people who would exercise their franchise if it were convenient and easy to do so.

Call your state legislators and object to this latest attempt to subvert our democratic system: http://legis.wisconsin.gov/Pages/waml.aspx

We're Number 37, and That's Not a Good Thing

In today's New York Times, Floyd Norris compares the economic fortunes of all 50 states using three different measures of  progress since the recession began. And Wisconsin comes in 37th. Meanwhile, Mike Ivey in today's Capital Times reports that "[i]ncome inequality in Wisconsin is increasing at a faster rate than the nation as a whole, a trend that authors of a new report warn [by the Wisconsin Budget Project] is causing social upheaval and straining government services." 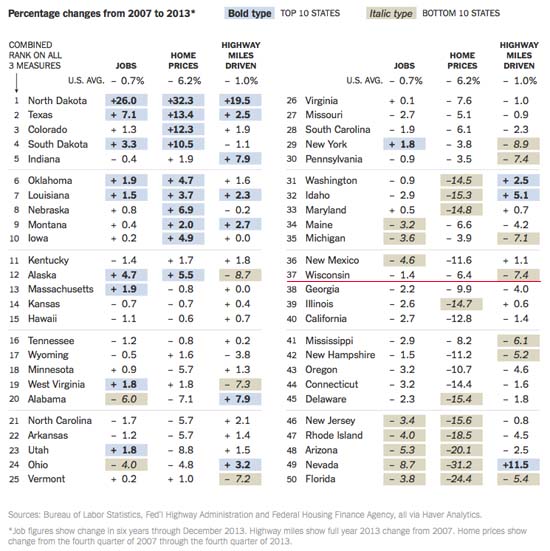 Factory Farms and Our Environment

Kim Wright, Executive Director of Midwest Environmental Advocates, Inc., discusses how the increasing industrialization of farming in Wisconsin is damaging the environment, polluting wells and other water resources, and impacting public health. CAFOs, also known as factory farms, are heavily concentrated in a few areas of Wisconsin and are especially dense near Green Bay. The problems they cause include air pollution and contamination of private wells.

In the question and answer period, some people wanted more information about getting well water tested. Here's a link to resources for that issue: http://www.uwsp.edu/cnr-ap/watershed/Pages/GWWell.aspx

The Truth about Hunger in Wisconsin 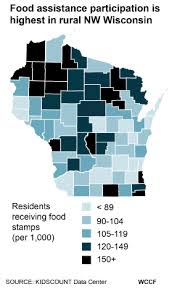 Kathleen Dunn's radio show recently discussed the food stamp program and how the new cuts to the program will affect recipients.  The usual folks called in and perpetuated the myths and stereotypes regarding food stamp recipients.  No matter what facts were presented by those in the trenches, such as the director of the HungerTask Force, people continued to talk about "personal responsibility," "getting a job," and controlling what people are allowed to buy with their food stamps.  This PBS portrayal of actual food stamp recipients tells the real story of people who are hungry in America and why they came to need food stamps.

The problem of hunger is not concentrated solely in our cities. It afflicts large areas of rural Wisconsin even more than it is experienced in Milwaukee County and the areas around Racine and Kenosha, as the map to the left shows. The darkest areas show where the highest concentrations of the hungry live. 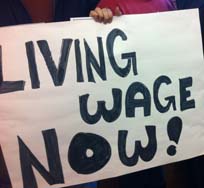 In this presentation, Kevin Kane argues that ultimately the state of Wisconsin will accept federal funds to expand BadgerCare. The financial advantages to the state are huge, he explains, and the results of the failure to do so are devastating to tens of thousands of Wisconsin citizens. You can view his slides here or you can watch and listen to his entire presentation, including the question and answer period of his webinar.

Why Raising the Minimum Wage Will Help Economic Growth

On February 6, 2014, Mike Wilder,Community Coalition Organizer for Wisconsin Jobs Now, held a webinar entitled "Why Raising the Minimum Wage Will Help Economic Growth." You can view the slides from his presentation here:

You can access the entire presentation -- both the slides and the audio, including the question and answer period.