There are two major surveys that yield a picture of employment, the Current Employment Survey (CES) and the Current Population Survey (CPS). CES surveys employers while CPS surveys households. They count jobs in slightly different ways, but both measures show how poorly Wisconsin is faring after the recession. Yes, the headline number -- average unemployment rate for the state -- stands at 5.7%, which is below the national average. But the number of jobs in Wisconsin and the number of people employed in Wisconsin still have not recovered from the Great Recession.

There are a legion of ways to measure the performance of a local economy. But no measure will show success if people are not working because they can't find jobs! 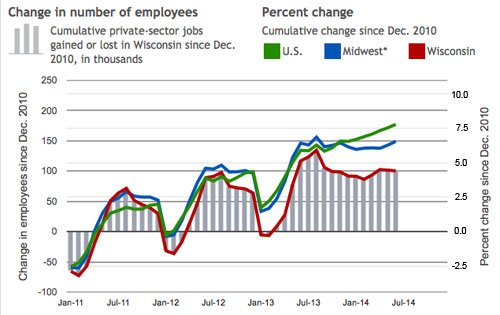 Wisconsin lags its Midwest peers not because governors and their policies don’t affect a state’s economy but because we lack effective leadership to move Wisconsin into the future.

A Reader Speaks about Bergdahl

This post is the text of an email sent to Grassroots North Shore by Dr. Robert L Seward, MD.

Bowe Bergdahl was rescued alive without the loss of one of our people. In fact, on President Obama's watch, the following crises were resolved successfully without the loss of a single American serviceman or woman: The Somali hostage crisis, the Bin Laden raid, the toppling of Muammar el Gaddafi in Libya, and the recent crisis/showdown with Russia, in the Ukraine. That is remarkable.That is the Obama doctrine, getting things done successfully without getting our people killed or captured.

At the Memorial day service, May 26 2014, at Arlington Cemetery, Secretary of Defense Chuck Hagel, a highly decorated Vietnam Veteran who has worked intimately with the President for a year, said this, in his introduction of the President: "America is approaching another period of transition. As always, these times of change and uncertainty require exceptional leadership. They demand leaders who are strong in the face of challenges, who are wise in the face of complexity, who are prudent in the face of uncertainty, and who are as humble as the courageous individuals they lead. Our Commander in Chief is one of those exceptional leaders.” Coming from Chuck Hagel, that is the ultimate compliment.

Dr. Robert L Seward, MD, is a retired board certified internist. He grew up in Berlin, Wisconsin and graduated from the U of Wisconsin Medical School. He is a licensed physician in Wisconsin and an Air Force veteran (1968-1970). He had the privilege of caring for veterans in Veterans Hospitals for the last 15 years of my career. I have listened to hundreds and hundreds of veterans’ stories and their experiences in combat. Dr. Seward now lives in Oregon.

The Truth about Walker's Policies and Job Growth

The Journal Sentinel's May 19th editorial on Gov. Walker’s exaggerations about business starts in Wisconsin includes a statement that needs a rebuttal. “We believe there is very little any Governor can do to directly affect job creation.”

In “The Three Little Pigs”, the Big Bad Wolf huffed and he puffed — but he could not blow down the house made of bricks! The forces defending Wisconsin’s status quo can huff and puff about the reasons Scott Walker will not be able to reach his campaign pledge of 250,000 new jobs created during his first term, but they can’t blow away the Governor’s responsibility for the slow job growth.

While there are many reasons for Governor Walker’s failures, an important reason is that when Governor Walker in 2011 abruptly cut state spending, and reduced the amount of goods and services the state purchases, he reduced demand, which contracted the economy. There are times when such spending cuts are necessary — but not in the middle of the worst recession since the 1930s and not abruptly. Not only did Governor Walker’s spending cuts have the immediate negative effect of reducing jobs, they also are having longer term negative consequences on education and infrastructure and weakening control by local elected officials.

Furthermore, Governor Walker’s decisions to refuse Federal assistance for Wisconsin for developing our infrastructure (the improved rail link between Milwaukee and Madison), and for helping those Wisconsin citizens most in need of help (the rejected Medicaid expansion) exacerbated this lack of progress in job creation.  Instead of hundreds of millions of our federal tax payments returning to Wisconsin, Governor Walker told the Federal government to give that money to other states. Also, state dollars have been substituted for federal dollars to support transit and health care.

Governor Walker made choices based on political ideology instead of what has worked — or not — elsewhere. (See Kansas, which has had poor economic growth in spite of large tax cuts)  A pledge without a sound plan is just a recipe for failure.

Along with Madison DA Ismael Ozanne, we have a great slate of candidates and any one of them would make a great AG. 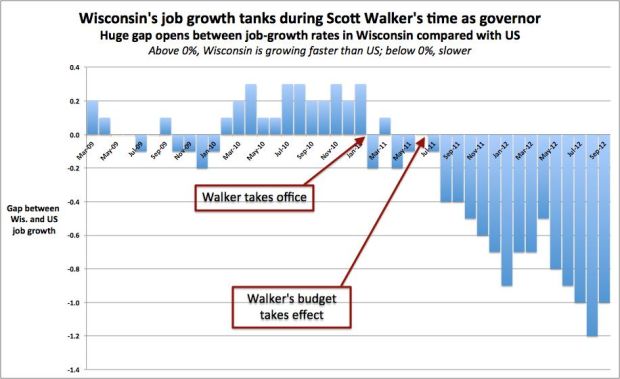