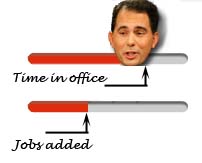 Scott Walker's re-election should be in trouble. His signature issue — that Wisconsin would grow 250,000 private-sector jobs before the end of his first term — is toast. As today's update to Politifact's Walk-O-Meter points out, the clock is running out "on Gov. Scott Walker's promise to create 250,000 private-sector jobs before the end of his four-year term.... In a little more than three years with Walker as governor, the state has created an estimated 101,572 private sector jobs. That leaves 148,428 jobs — or an average of 14,842 a month for the rest of the year — for Walker to achieve his promise."

So he can't really run on his record. But that might not translate into an electoral defeat. As we head into the 2014 election cycle, it may be useful to look back at some of the analysis of the recall election if only to see whether the arguments proffered then still resonate with us today. And to evaluate our own thinking about how we frame our positions now.

The day after the failed recall, Dean Bakopoulos published an article in Slate called "What's the Matter with Wisconsin," a riff on Thomas Frank's book What's the Matter with Kansas. His basic argument is that Walker's camp successfully turned some ordinary middle-class Wisconsinites into scapegoats. Here's the gist of it:

As Wisconsin’s new political landscape so clearly indicates, conservatives have ... managed to vilify plain old working people as elitist fat cats. Librarians, teachers, public employees, and union laborers: Basically, people who earn health insurance and decent wages have suddenly become the things that stagnate an economy and raise taxes, when in truth they, and those wages they enjoy, have been the lifeblood of a struggling post-industrial economy.

But by declaring war on teachers, union laborers, and public sector employees, the well-heeled spinners behind the rise of Scott Walker have managed to make struggling Americans vote against their own best interests out of a sense of fear and envy. Struggling workers — and most comfortable middle-class workers — often to need an identifiable villain, someone who is holding them back from success, in order to vote Republican. If Republicans can present themselves as an enemy of that villain, they win. That’s what happened happened last night in Wisconsin.

I wonder how many Democrats, whether moderate or progressive, agree with Bakopoulos's assessment. And to the extent we see merit in his position, what do we need to do to identify alternative "villains"?