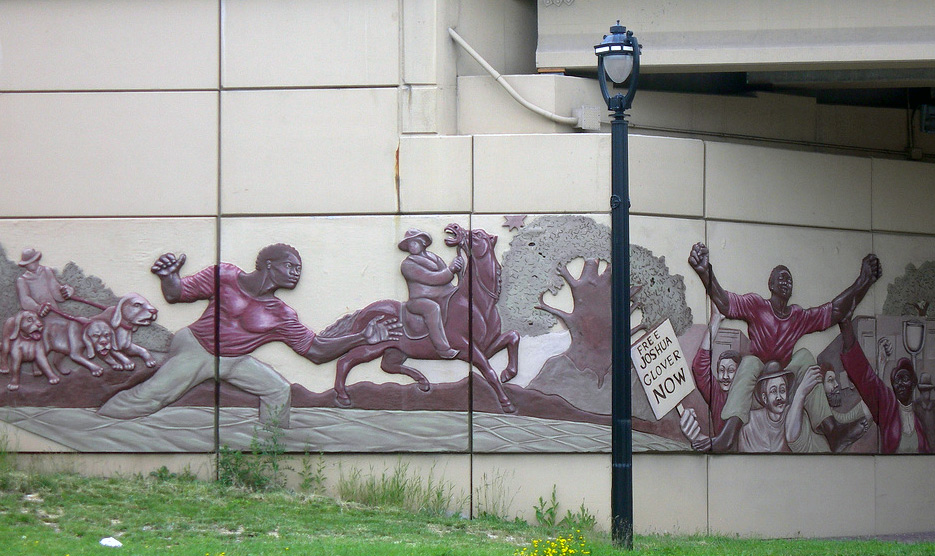 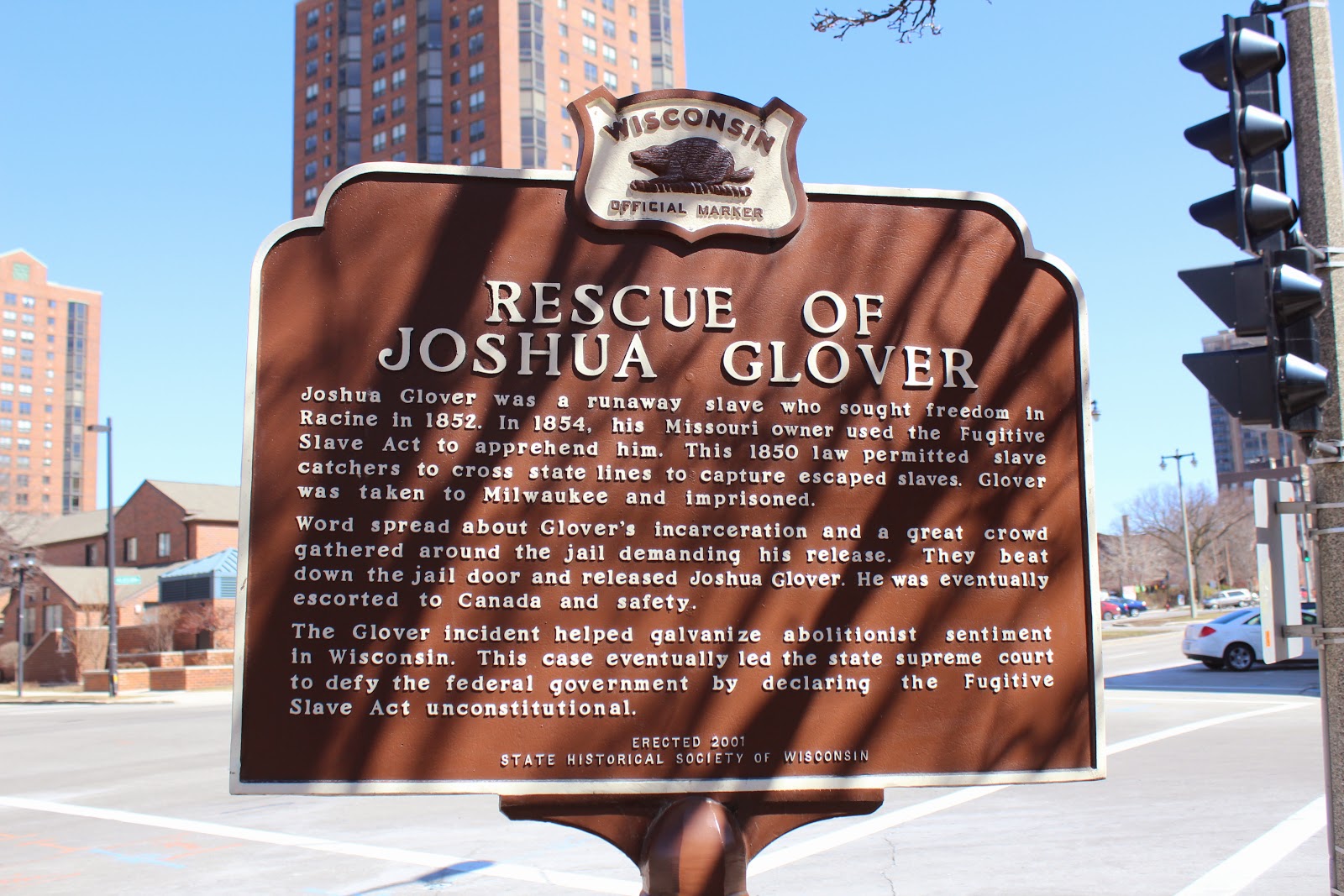 Bennami Garland pursued Joshua Glover armed with an arrest warrant, spies, federal agents, Deputy Marshall Cotton, and the Fugitive Slave Law of 1850.  On March 10, 1854, a Friday, Garland, Cotton and six agents quietly surrounded the cabin as Joshua played cards with his friends William Alby and Nelson Turner.  The gang broke into the cabin and arrested Glover. Brutally beaten, bloodied, and barely conscious, Joshua Glover was dumped in a wagon and delivered to the Milwaukee jail.  William Alby managed to escape through the cabin window and raced to tip off abolitionists in Racine about the arrest.  Word spread quickly throughout Racine, a heavily abolitionist city.  At least one hundred citizens boarded the steamer to Milwaukee.  Others followed on land.  Early Saturday morning, March 11, 1854, Sherman W. Booth, a dedicated abolitionist and editor of the anti-slavery newspaper, The American Freeman, received a telegram from the mayor of Racine warning of the kidnapping of a citizen by a U.S. Marshal without legal process or examination by their own authorities.  Booth began investigating.  Discovering that Glover was languishing in the jail with no care for his injuries, no plans for a hearing nor writ of habeas corpus, Booth wasted no time.  He saddled a horse and rode through the city, imploring loudly, in the vernacular of the day, “Ho, to the rescue!  Ho, to the rescue!  Ho, to the rescue!”  Five hundred Milwaukeeans gathered.  A contingent of another hundred, led by their sheriff, came to the jail from Racine.

Throughout the day, negotiations between an appointed vigilance committee of protesters and Milwaukee’s Sheriff Page were futile in freeing Glover.  Hundreds more people gathered around the jail that stood where Cathedral Square is now located.  The crowd grew more animated as their outrage for the injustices boiled over.  Their demand for the keys to Glover’s cell was denied, "whereupon, about twenty strong and resolute men seized a large timber some eight or ten inches square and twenty feet long and went for the jail door; bumb, bumb, bumb, and down came the jail door and out came Glover" (Mr. Chauncey C. Olin, www.burlingtonhistory.org/). The crowd managed to protect Glover from the authorities as he was spirited away from town.  Eventually, after several weeks of hiding at various safe houses, the Great Lakes opened for the shipping season, and Joshua Glover boarded a vessel to Canada.  He lived in freedom for 35 more years.

This honorable act in our history set off six years of legal wrangling between Sherman Booth, the Wisconsin Supreme Court, and the Supreme Court of the United States.  After Joshua Glover’s escape, Booth was arrested and charged with violation of the Fugitive Slave Act of 1850.  States’ Rights became as important in Wisconsin as any other state at the time.  Booth spent nearly six years in and out of prison until President James Buchanan remitted his fines.

Note:  It appears that we had a reasonable beginning, in an unreasonable time, in Wisconsin regarding race relations.  It has been a long time, however. To now be classified as one of the most segregated cities in the nation is shameful. Following is a list of statistics that illustrate a disturbing picture of our city.

Milwaukee has been noted as one of the most segregated cities in America, where poverty, drugs, and violence are escalating at an alarming rate. Below are some statistics about our city:

Milwaukee is the 5th poorest city in the US.
Sanburn, Josh. "This is the Poorest Big City in the U.S." TIME Magazine 17 Sept. 2015; based on US Census Bureau, American Community Survey 2014 data

Milwaukee has the greatest segregation of the poor from everyone else than any other metro region.
Florida, Richard and Charlotta Melander. SEGREGATED CITY The Geography of Economic Segregation in America’s Metros. Toronto: Martin Prosperity Institute, Feb. 2015.Web. 7 Mar. 2016

Milwaukee is the most segregated city in the US.
Jacobs, Harrison, Andy Kiersz, and Gus Lubin. "The 25 Most Segregated Cities In America." Business Insider. Business Insider, Inc, 22 Nov. 2013.

Wisconsin has been ranked the worst state in the country for racial disparities between black and white children.
Race for Results: Policy Report. Rep. Baltimore: Annie E. Casey Foundation, 2014.

The unemployment rate for black males (ages 25-54) in Milwaukee is 52.7%.
Levine, Marc V. Race and Male Employment in the Wake of the Great Recession. University of Wisconsin - Milwaukee. Center for Economic Development, Jan. 2012.

During a nationwide FBI-coordinated investigation of human trafficking last summer (2013), 10 children were rescued in Wisconsin and 100 suspected traffickers were arrested in a single day — numbers that were among the highest of all the cities participating in the probe.
Weisberg, Louis. "Wisconsin Lawmakers Combat State's Growing Human-trafficking Problem." Wisconsin Gazette. Wisconsin Gazette, 9 Mar. 2014.

A study conducted by the Milwaukee Homicide Review Commission between the years 2010-2012 showed that 77 youth (ages 12-17 years) in Milwaukee were sex trafficked. Note that this only includes the youth that had contact with the Milwaukee Police Department during the time of the study.
Estimating the Number of Sex Trafficked Youth Using Contacts with the Milwaukee Police Department. City of Milwaukee. Milwaukee Homicide Review Commission in Consultation with Rethink Resources, 15 Apr. 2013.  http://cityonahillmilwaukee.org/about/milwaukee_statistics.php