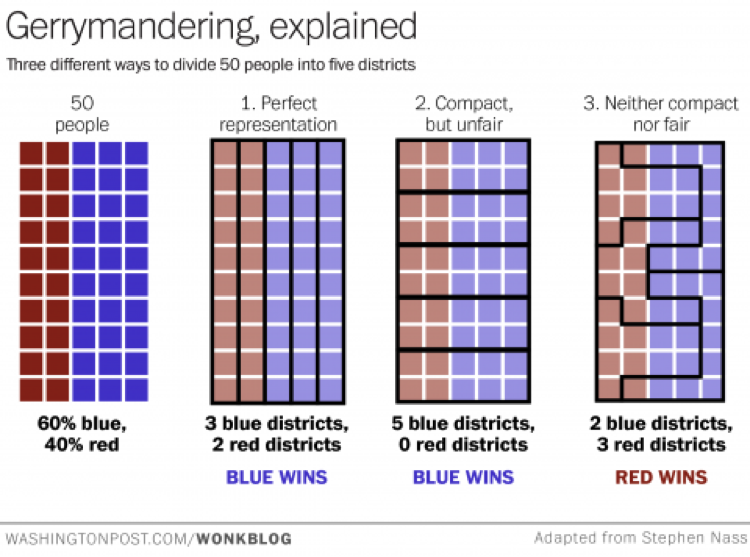 Most previous cases challenging gerrymanders have been based on the qualitative, anecdotal argument that "this is a bad thing." Although the US Supreme Court has recognized that egregiously drawn boundaries might be unconstitutional, no constitutional challenge has yet to succeed on that ground "because plaintiffs have been unable to offer a workable standard to distinguish between permissible political line-drawing and unconstitutional partisan gerrymandering" (Brief filed July 8, 2015).

The current suit from Wisconsin does offer an objective standard for evaluating the difference between appropriate and unconstitutional gerrymandering, what the plaintiffs call the "efficiency gap." According to the brief, the Current Plan “violates the First and Fourteenth Amendments of the United States Constitution” and plaintiffs seek “an order permanently enjoining the implementation of the Current Plan in the 2016 election." To avoid the appearance of a partisan decision, the suit requests a three judge panel.

The Legal Complaint goes on to say that

one way to measure a district plan’s performance in terms of partisan symmetry is to determine whether there is an "efficiency gap" between the performances of the two major parties and, if so, to compare the magnitude of that gap to comparable district plans in the modern era nationwide. The efficiency gap captures in a single number all of a district plan’s cracking and packing, the two fundamental ways in which partisan gerrymanders are constructed. Cracking means dividing a party’s supporters among multiple districts so that they fall short of a majority in each one. Packing means concentrating one party’s backers in a few districts that they win by overwhelming margins. Both cracking and packing result in "wasted" votes: votes cast either for a losing candidate (in the case of cracking) or for a winning candidate but in excess of what he or she needed to prevail (in the case of packing). The efficiency gap is the difference between the parties’ respective wasted votes in an election, divided by the total number of votes cast. But where the efficiency gap is large and much greater than the historical norm, there should be a presumption of unconstitutionality. In such a case, intent to systematically disadvantage voters based on their political beliefs can be inferred from the severity of the gerrymander alone.

According to a study by Nicholas O. Stephanopoulos & Eric M. McGhee (Partisan Gerrymandering and the Efficiency Gap, 82 U. Chi. L. Rev. 101, 2015), "stayed roughly constant from 1972 to 2010. But in the current cycle, fueled by rising partisanship and greater technological sophistication, it spiked to the highest level recorded in the modern era: over 6% for state house plans"b(Case Brief filed July 8, 2015). In the 2012 elections, when the most recent redistricting plan went into effect, the pro-Republican efficiency gap was 13%.  Although "more Democrats than Republicans voted – 1.4 million versus 1.2 million [in the 2012 election],... Republicans overwhelmingly captured the Assembly 60 seats to 39" (Marge Pitrof, "Wisconsin Residents Sue State, Claim Legislative Districts are Unconstitutional", WUWM.com, July 9, 2015).

So much effort is currently being spent to resolve the myriad of issues that now plague us.  While those efforts are both laudable and effective, none of them target the root cause:  the current extreme Wisconsin administration.  If that group were not in power, many of these problems could probably be eliminated at one fell swoop.  And until the ultra-partisan apportionment of electoral power passed in 2011 is reversed, the hope of removing them from power may be nothing more than a fantasy.