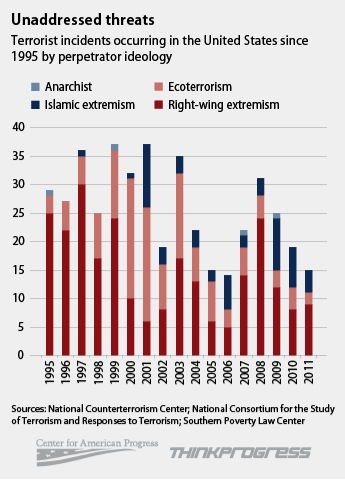 How often have the media classified these all too common atrocities as domestic terrorism?  The majority of these crimes seem to have been committed by white Christian men, but is anyone shouting for limiting the freedom of an entire group of persons based on the acts of a very few?  Interestingly, Mike Huckabee, the former Arkansas governor and Republican presidential contender who's known for his social conservatism, admonished the alleged shooter in an interview with CNN's Brianna Keilar Sunday on "State of the Union."

What he did is domestic terrorism, and what he did is absolutely abominable, especially to us in the pro-life movement, because there's nothing about any of us that would condone or in any way look the other way on something like this.

Since we are yet again in the throes of another elongated election season, Huckabee may simply be trying to distance himself and other social conservatives from this violence, forgetting that the strong rhetoric of many conservatives — that it is acceptable to use violence against anybody who is different from you or who does not share your beliefs — provides the inflammatory message. But whatever Huckabee's motives are, he is standing virtually alone by calling the act domestic terrorism. As a recent Slate article points out, this fall has seen a number of attacks on Planned Parenthood facilities.

In July, employees at a clinic in the Chicago suburb of Aurora, Illinois, reported anattempted arson. In August, firefighters found half a burning car at the construction site of a future clinic in New Orleans. On Sept. 4, a clinic in Pullman, Washington, wasset ablaze at 3:30 a.m., and on Sept. 30, someone broke a window at a Thousand Oaks, California, clinic and threw a makeshift bomb inside.

Now, women’s health advocates are demanding more coverage of the attacks from the mainstream media and a full investigation from the Department of Justice. “Where is the outrage?” NARAL Pro-Choice America President Ilyse Hogue asked in astatement on Friday. “The media need to report these incidents as what they are: domestic terrorism.”

It appears that we have a double standard:  terrorism if heinous acts are committed outside our borders, something else (usually the act of a mentally ill “lone wolf”) when it is done within by one of our own (Christian) citizens.