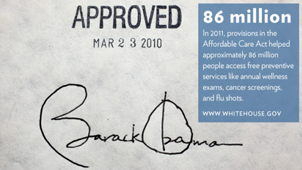 It defies logic that extreme legislative Republicans would choose to reject the opportunity to expand health care coverage to nearly 85,000 more Wisconsinites, save the state $119 million over the biennium, and create approximately 10,500 new jobs for a state that is lagging behind the rest of the nation. Instead of responsibly covering more Wisconsinites, some neighbors will now lose BadgerCare coverage and be pushed into an exchange that is not designed for their income level. Families unable to make that payment will be left uninsured and using emergency rooms with the costs shifted on to taxpayers.

Minnesota, on the other hand, opted to accept additional federal funding for their Medicaid program. The adoption of these funds was done through passage of legislation that was signed by Minnesota Governor Mark Dayton in February 2013. As a result, Minnesota was able to expand health care coverage to 35,000 additional childless, low-income adults without having to utilize additional tax dollars from the state for at least the next three years.

Implementing the new changes outlined in the Affordable Care Act required states to either create their own state-based health care exchange, opt to follow the standards and guidelines set forth by the federal government, or adopt a hybrid of the two.

Governor Walker had said that Wisconsin would not consider building a state-based exchange until after the November election hoping that the country would elect a new president and overturn the health care reform law. When that did not happen, he unilaterally decided that Wisconsin would forgo the opportunity to create its own exchange.

Wisconsin has unique health care needs. Such specialized needs required creating an exchange tailored to meet the needs of Wisconsinites. Unfortunately, this is not the path Governor Walker and Legislative Republicans selected.

In contrast, neighboring Minnesota opted to keep the exchange local by creating their own online marketplace, called MNSure. The path our Republican leaders chose have likely had a negative impact on the premium costs in Wisconsin compared to those in Minnesota. In Minnesota, the average monthly premium across all age groups will be $192. The next lowest average is in Tennessee at $245. And the national average is $328. Unfortunately for Wisconsinites, we will see average monthly premiums of $361. That is 88% higher than the average premium in Minnesota. It is important to mention that the average premium rates cited do not include possible premium discounts, which could further lower premiums for lower- and middle-income individuals.

While we all know our Green Bay Packers are far superior to the Minnesota Vikings, the same cannot be said of our governor's choices when implementing the Affordable Care Act in Wisconsin. Not only will Wisconsin be paying more to ensure fewer Wisconsinites, but Wisconsinites will also be paying more on average towards premiums than our neighbor state. All the facts indicate that our governor and Wisconsin's Legislative Tea Party Republicans were so focused on opposing affordable health care at all costs, that they sacrificed our health care coverage and wallets in the process. Looking at the case study of Minnesota, we are reminded that things could have been so much better.