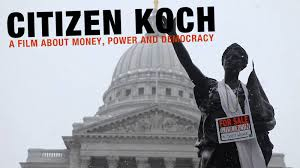 The Supreme Court’s Citizens United decision in 2010 lifted a century-long ban on restricted corporate election spending, unleashing a new era of unbridled special-interest campaign finance. Citizen Koch examines the mushrooming struggle between money and democracy through the dramatic lens of the 2011 standoff in Wisconsin when Governor Scott Walker, bankrolled by out-of-state billionaires, stripped state employees of their union rights.

Among a million outraged Wisconsinites, we meet individuals struggling with their Republican political loyalties as they decide whether to join the grassroots-fueled recall of Walker, a GOP rising star and Tea Party favorite. Meanwhile, on a national level, former Louisiana governor Buddy Roemer watches his Republican presidential campaign fizzle as he refuses, on principle, donations of more than a hundred dollars and gets outspent and drowned out by Super PAC–funded opponents. Combining intimate vérité scenes and a big-picture–style investigative exposé, Citizen Koch probes behind the headlines to penetrate one of the core issues of our time: Who really has the power in America—private donors or the voting public? - C. L.