If Not Now, When?

On Thursday, April 10, Martha De La Rosa, State Director for 9to5 of Wisconsin, is presenting a webinar entitled "When Women Do Better, Wisconsin Does Better." You can sign up to attend the 7:00 PM presentation by clicking on this link: http://www.anymeeting.com/PIID=EA53DE8889493D 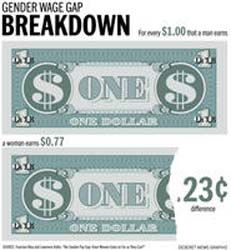 But perhaps you think this issue isn't really very pressing. I beg to differ. As the Institute for Women's Policy Research reported In January, 2014,

The Lilly Ledbetter Fair Pay Act, the very first act President Obama signed into law, sought to make it easier for women to seek redress for wage discrimination in the federal courts.

Shocking the state, legislative Republicans rejected Wisconsin's tradition of fairness and rolled back equal protection laws for Wisconsin's working women by passing 2011 Wisconsin Act 219 last session. The adoption of this proposal eliminates equal protection laws for Wisconsin's women and limits their ability to seek justice for discrimination. This bill not only halted much needed steps towards equal pay for women, but also erased prior advances that have been made.