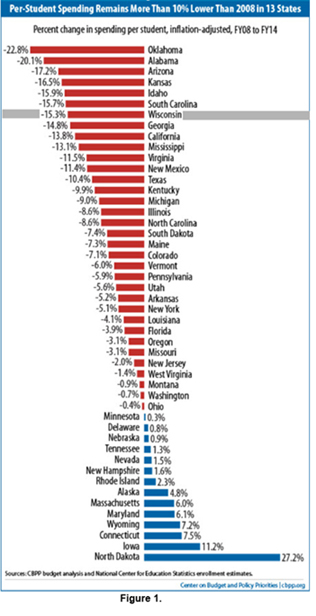 The picture is even grimmer looking at actual (inflation-adjusted) dollars spent by the various states! The report shows that Wisconsin spent $1,038 less per student in inflation-adjusted dollars last year than it did 6 years ago!  That was the 2nd largest decline in the nation! Only Alabama saw a bigger decline in actual dollar spending per student.  (See Fig. 2)

Of course some of the cuts are due to the Great Recession, but the question remains - why does Wisconsin compare so poorly to other states? The worst of the economic crisis is behind us, and most other states have increased per capita student spending in the current fiscal year, but not Wisconsin. Wisconsin is one of only 15 States that is spending less this year.  (See Fig. 3)