Reportedly, in their information release following the tragedy in Orlando, this largest of the gun lobby organizations made three points:

Clearly, items one and two are related:  you know, that supply and demand feature of the revered free market.  This author has heard an estimate that there are 25 million assault rifle owners in the US.  Sales can be attributed to the NRA’s focus on fear-mongering to increase the market for assault rifles.  And as for their laudable use in hunting, think about this.  People probably hunt for four main reasons.  First, for those who hunt for food, the use of an assault rifle would seem strange considering the damage that the ammunition can do to the carcass and hide.  Second, for those who hunt for the challenge of the sport, blasting away at prey hardly seems to require great skill.  Third, there are probably those who participate in hunting for the bonding that takes place,  possibly relegating the weapon to a symbol of something – perhaps power or prowess.  Finally, there are those who hunt simply for the thrill of killing. Only for this last group does using an assault rifle might make any sense.  Apparently, the NRA has become so convinced that they have the public thoroughly conned that they do not even take the time to prepare a cogent argument.

Make no mistake.  “What the Orlando attacker used was a weapon of war. It was designed to kill as many people as possible, as quickly as possible.”   Mother Jones reported that an audio captured by a bystander outside the Pulse nightclub recorded the shooter firing  24 shots in 9 seconds. 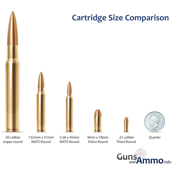 The manufacturer describes it as compact and lightweight, modular, and quotes a fan extolling that it is a “blast to shoot.”  Modularity supports the substitution of different stocks, grips, and other parts of the rifle.  It also means that it can easily be disassembled and reassembled – perhaps the better to conceal?

The thirty round high-capacity magazine uses large-sized ammunition, similar to the second and third bullets in the graphic.

A bullet exits the muzzle at a speed of well over 500 feet per second, which means it can travel a mile in under 10 seconds.  At closer range, this velocity makes the weapon even more lethal.   It is a powerful, high velocity implement of death that kills quickly, effectively, with maximum damage and carnage to the bodies of the victims and minimal effort by the shooter.

On Wednesday, June 15th, Rachel Maddow did a very informative segment devoted to this weapon.

In the blink of an eye, even before the siege was over, the usual suspects, with hair afire, arms flailing, and mouths in overdrive began blaming foreign terrorists from the Middle East, radical Islamists, in fact all Muslims – well, you know the drill.  Since  the investigation was not yet  underway, they did not let the lack of actual facts stop them from spouting their vile rhetoric.  But then again, it never does.  But Omar Mateen was not a foreign terrorist who found a way to get into this country to exact vengeance.   His parents came to this country legally from Afghanistan in 1983, most likely to escape the conflict related to the Russian occupation during the ‘80s.   Omar was born in 1986 in Queens, NY (coincidentally also the birthplace of Donald J. Trump).  Perhaps instead of blaming Barack Obama for Orlando, the episode should be laid at the feet of President Reagan.

What do Eric Harris, Dylan Klebold, James Holmes, Jared Lee Loughner, Adam Lanza, and Dylan Roof have in common?  They are all young white males who perpetrated some of the more infamous of recent mass shootings.  They are also Christians, and yet there is nobody who would claim that the entirety of their religion must be held accountable for their actions.

As more information is becoming available, it seems that the driving forces behind the Orlando massacre may be a complex amalgam of religion, culture, and gender identity, all interacting in unexpected and ironic ways.  Forensic science has come a long way; however, profiling Mateen’s motivation is a challenge because he is no longer able to speak for himself.     Understanding what drove him to commit this atrocity does not in any way exonerate him, but maybe, just maybe, it will provide information that can lead to the prevention of similar acts in the future.  Activity that leads to resolutions is of value:  the blathering of ill-advised politicians is not.

The frequency of mass shootings has not inured us to their horror.  Our efforts to eliminate this particular scourge are blocked at every turn.  It is time for elected officials to prioritize conscience and conviction over career.  It is time to put people before politics and profit.  It is time to turn outrage into determined, sustained action.   It is time to stand up, and, with a single unified voice that roars from ‘sea to shining sea’, shout ENOUGH!