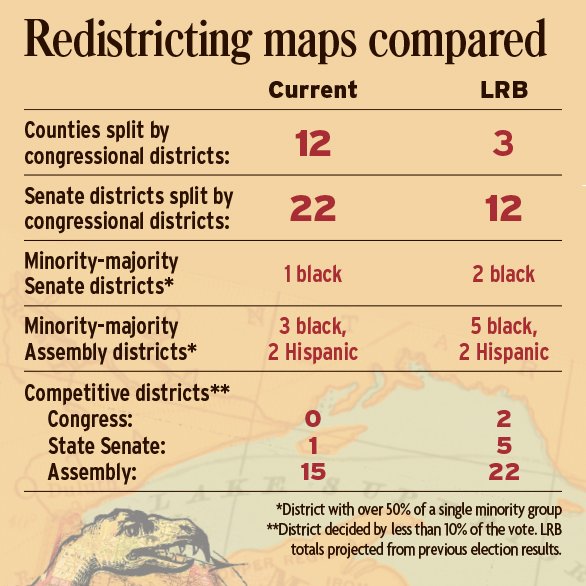 Over the past few years, several states — including Florida, Ohio, and Arizona — have seen grassroots movements successfully challenge the way their states had been drawing state and congressional district maps. When put to the voters in those states, overwhelming majorities elected to reform the process to ensure fair districts and fair elections.

It turns out that citizens of all political identities and ideologies believe that voters should choose their representatives and not the other way around.

In Wisconsin, where we don't have recourse to referenda or popular plebiscites, we had to use the courts to challenge the hyper-partisan redistricting the legislature accomplished — in secret — in 2011.

SO: it is UP TO US — the citizens of Wisconsin — TO MAKE SURE THE NEXT MAPS ARE FAIR. We will need to put public pressure on our legislators, both Democratic and Republican, to  UNRIG THE MAP.

What we must do

First and foremost, we must galvanize public pressure. As part of a growing, state-wise coalition, Grassroots North Shore is undertaking a campaign of letter-writing and lobbying legislators to ensure that redistricting in 2021 uses an inclusive and transparent process rather than repeating the secretive and hyper-partisan methods used in drawing our legislative districts in 2011.

On this page, you will find resources for writing letters to the editor of your local newspapers and other media outlets in addition to links to published articles and editorials about gerrymandering and redistricting.

In the image on the right, the Legislative Reference Bureau has illustrated how much more competitive legislative districts are like to become when the maps are drawn to respect one person, one vote and are not rigged to perpetuate one party's stranglehold on governance.

Resources for coordinated grassroots action to slay the gerrymander and institute nonpartisan redistricting in Wisconsin.

Op-Eds and Letters to the Editor

Contacting your Assembly Representative and Senator

Articles discussing gerrymandering and its effects in our democracy.

How a gerrymander works