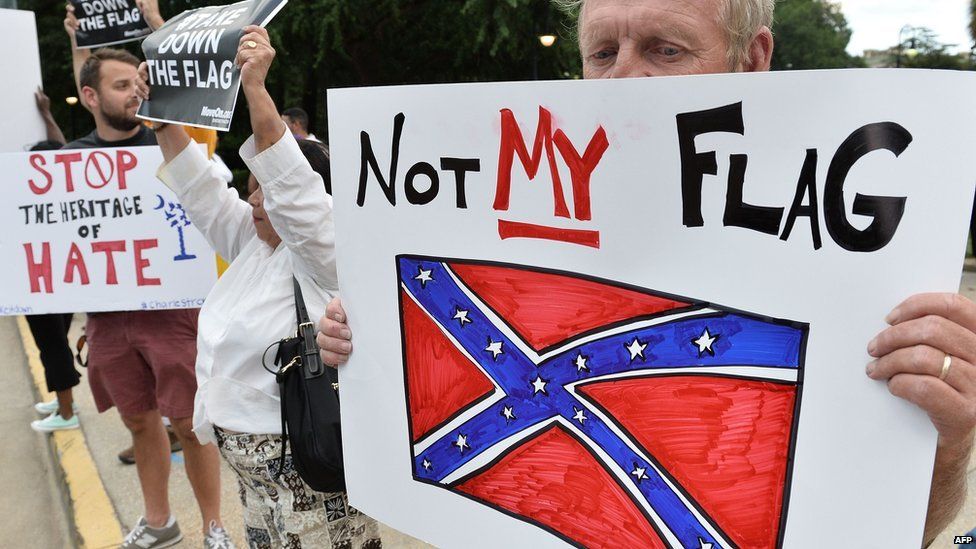 Last week's iteration of duck-and-cover would be funny if the event that prompted it were not such a national horror. On June 20, just after former presidential candidate Mitt Romney had called for the Confederate battle flag's removal from the grounds of the SC Capitol, Scott Walker ducked the issue:

"The placement of a Confederate flag on the Capitol grounds is a state issue and I fully expect the leaders of South Carolina to debate this but the conversation should wait until after the families have had a chance to bury and mourn their loved ones," Walker said in a statement to BuzzFeed last week.

But as soon as the Governor of SC announced her support for taking the flag down, Walker hurried to concur. Truly an example of leading from the rear of the pack!

The more troubling divide-and-conquer move involves $3500 in campaign contributions (of course) from Earl Holt III, the president of the Council of Conservative Citizens (CofCC). The Southern Poverty Law Center lists the CofCC as a hate group and describes its core principles:

The Council of Conservative Citizens (CCC) is the modern reincarnation of the old White Citizens Councils, which were formed in the 1950s and 1960s to battle school desegregation in the South. Among other things, its Statement of Principles says that it “oppose[s] all efforts to mix the races of mankind.” Created in 1985 from the mailing lists of its predecessor organization, the CCC ... has evolved into a crudely white supremacist group whose website has run pictures comparing the late pop singer Michael Jackson to an ape and referred to black people as "a retrograde species of humanity."

As the New York Times reported today, the CofCC has a long history of "friendship" with many Republican officials, especially from Southern States. Notable among them: former Senator Trent Lott (MS), former governor Haley Barbour (MS), and former governor Mike Huckabee (AR). So why would the current president of this racist organization be donating $3500 to Scott Walker's campaigns? The answer probably lies in the so-called Southern Strategy developed by Richard Nixon in the late 60s and early 70s. In a March 4, 2015, Salon article titled “5 Signs Scott Walker is employing GOP’s racist ‘Southern Strategy,’ Roger Bybee lays out the case. Here’s the conclusion of his exposé of Walker’s Southern Strategy:

Walker’s turn to “dog-whistle“ politics, or the manipulation of whites’ racial resentments, is as noteworthy as it is notorious. It begins with an agenda that is hostile to government programs benefitting the poor and big government programs of any kind—except for those providing subsidies to corporations and the rich. However, there is a not-so-subtle subtext of pro-white racism.

There are many dots that connect this ugly picture: Walker’s war against labor and support for “right-to-work” laws despite their racist legacy and present-day impacts; his willingness to use Willie Horton-style ads which stoke white fears of blacks; his support for restricting the [voting] right[s] of blacks and Latinos; his institutional ties to long-standing institution like the Bradley [Foundation] which are tacitly approving of white supremacy; his links to media personalities who thrive on feeding racism; and his policies punishing urban citizens, especially people of color.

At the heart of Walker’s electoral successes lies this divisive strategy. Now he’s taking it on the road and into the welcoming arms of conservative Republicans across the country. The original Southern Strategy has morphed into a nationwide effort to use racial resentment as an inducement for “ordinary Americans” to vote against their own economic interests.  As Thomas Frank, author of the insightful book What’s the Matter with Kansas?, explains,

the country we have inhabited for the last three decades seems … like a panorama of madness and delusion worthy of Hieronymous Bosch: of sturdy patriots reciting the Pledge while they resolutely strangle their own life chances; of small farmers proudly voting themselves off the land; of devoted family men carefully seeing to it that their children will never be able to afford college or proper health care; of hardened blue-collar workers in midwestern burgs cheering as they deliver up a landslide for a candidate whose policies will end their way of life, will transform their region into a “rust belt,” will strike people like them blows from which they will never recover. [Thomas Frank website]

Of course, I jest. None of this is amusing after all.